Why do women carry things on their heads?

Agnes Parker of Chilton Cantelo, Somerset, was crossing a bridge in 1592 with a bundle of hay on her head and a pot for milking in her hand, when a gust of wind blew her off and into the water below, where she drowned. Clearly the combination of a large load of hay on your head, a heavy woollen dress and high winds could be fatal. Mark has already mentioned this case from the coroners’ inquests in his post on agricultural work. But it got me thinking about another set of issues altogether. Why did (and do) women carry things on their heads?

There is good visual evidence from medieval and early modern north-west Europe that it used to be commonplace for women to carry heavy or awkward loads in this way. The earliest English example I know is in the Luttrell Psalter, an exceptionally revealing illuminated manuscript from the early fourteenth century, now owned by the British Library. Among its many scenes of agricultural life is one of sheep being milked in a pen, whilst two women walk away with pots on their heads, presumably carrying the milk back to the farm:

For the early modern period such images are common. The image below on the left is from a 1540s book of hours (the ‘Golf Book’, held at the British Library) from Flanders, and shows a woman carrying food out to harvest workers, with a basket on her head. A very similar English scene is found in the Trevelyon Miscellany of 1608 from the Folger Library, below on the right:

The two women in this seventeenth century woodcut are probably more milkmaids, but here carrying wooden buckets on their heads rather than pots. Perhaps the most plentiful source of these images are the many ‘Cries of London’ produced between the late seventeenth and early nineteenth century, which turned small-scale itinerant retailers of specialist products into a subject of picturesque fascination. Many of these street-sellers were women, and most carried their goods on their heads – judging by these images: 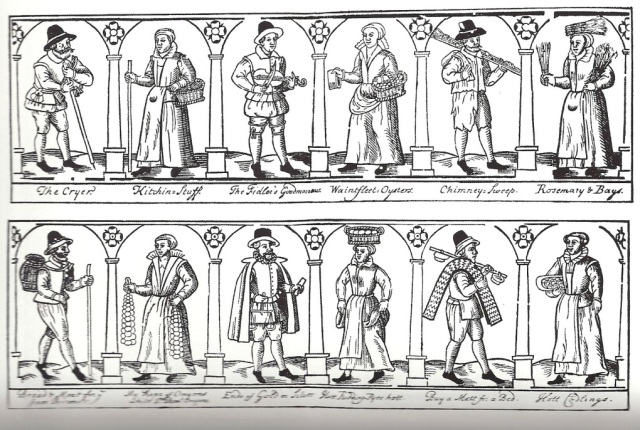 Commonplace in the early modern period, these images seem to disappear after around 1820. This romanticised image of a rural milkmaid is one late example from the second half of nineteenth century, from a painting by Myles Birket Foster:

Few appear in the photographical age. An admittedly not very scientific trawl of Google images turned up one image from Scotland of young female miners from the late -nineteenth century, and a posed image of a woman in rural France from the 1950s balancing a load of hay on her head while raking: 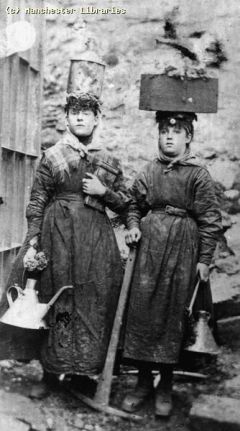 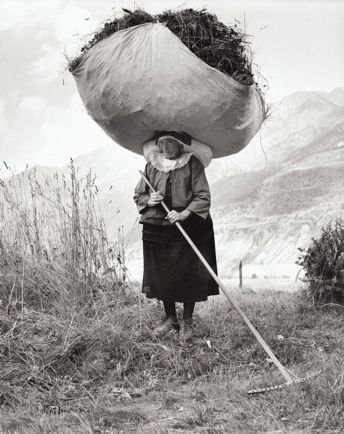 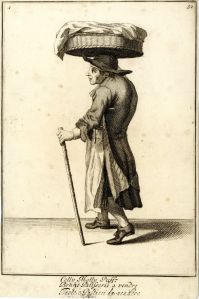 Images of men carrying loads on their heads do occur, historically and in the modern world – but they are less common than images of women carrying things in this way.

What can we conclude from all this? Well these conclusions are speculative, but to me it seems that first, women carry things on their heads rather than men because men have easier access to other forms of transport. On early modern farms men drove carts and were responsible for caring for the horses. So far the project hasn’t found any examples of women driving carts. Women did ride horses, but perhaps not as often as men.

Second, women were expected to undertake hard physical work, such as lifting and carrying heavy loads. They learnt the skill of carrying heavy loads on their heads at a young age, and did so habitually as young women when required to transport pots, buckets, baskets and bundles that were bulky or heavy. There is evidence of women’s hard physical work from other sources. Bones from the medieval village of Wharram Percy demonstrate that both women and men bore the burden of hard physical labour, although the wear and tear on their skeletons suggests slightly different work patterns.[1]

Third, the fact that women routinely carried heavy loads on their heads in pre-industrial societies should remind us that (a) much routine work, such as collecting water, gathering fuel and laundering linens was physically demanding; (b) agriculture in the pre-industrial economy required a lot of fetching and carrying on foot – between house and fields (taking out meals and fodder, bringing in milk) – and between farm and market (taking in goods to sell and returning with purchases), and much of this was done by women; (c) that many women with very few resources made their living from selling small goods, as the Cries of London and Paris show – another very physically demanding occupation.

At least one question that remains is why (and when exactly) did women in north-west Europe stop carrying things on their heads? I’ll leave that one with the modernists among you – and any other comments, references and images on this topic that readers have would also be gratefully received.

Leverhulme Funded Project at University of Exeter: Pioneering a New Methodological Approach to Early Modern Women's Work
View all posts by Women's Work in Rural England, 1500-1700 →
This entry was posted in Findings. Bookmark the permalink.

20 Responses to Why do women carry things on their heads?